The torch carrying the Olympic flame will make an interstellar pit stop at the International Space Station as part of the Sochi 2014 torch relay, Russian Olympic officials confirmed on Monday.

As part of the ambitious plan, which was signed by Sochi chief organizer Dmitry Chernyshenko and Vladimir Popovkin, the head of Russia's space agency, the torch will launch from the Baikonur Cosmodrome in central Kazakhstan on November 7, meaning the relay will take the unusual step of leaving the Olympic host country even before venturing hundreds of kilometers into space.

«This is a demonstration of our successes and our achievements and Russians, they should be proud,» Chernyshenko said at Star City, the site of the Yuri Gagarin Cosmonaut Training Center near Moscow.
«Today we have added a new page in the history of the Sochi Olympic Games project.» 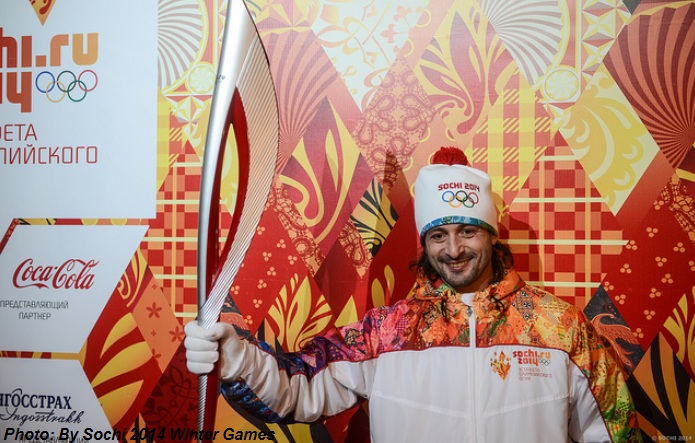 The station, which is currently commanded by Russian cosmonaut Pavel Vinogradov, has an orbit height of 370 to 460 kilometers, according to NASA. On board, Russian cosmonauts Oleg Kotov and Sergey Ryazan will chaperone the torch on a spacewalk, Chernyshenko said.

The torch will remain unlit throughout the voyage because of safety regulations on board the Soyuz and at the ISS. «We've got a rocket fueled by oxygen and kerosene, so there are basic safety rules,» Popovkin said. «There can't be any naked flames.»

After the flame arrives from Greece in October, it begins a 123-day, 65,000-kilometer odyssey in Moscow, spiraling out from the capital before heading east and looping around the Kamchatka Peninsula, down to Vladivostok and back across southern Siberia via Lake Baikal, the world’s largest freshwater lake.

On its way through more than 2,900 towns in Russia’s 83 regions, the torch will make its way back into European Russia, eventually winding down to the Black Sea resort of Sochi for the Opening Ceremony on February 7, 2014.

More than 14,000 torchbearers and 30,000 volunteers will be involved in the journey as the torch travels by foot, car, train, plane and troika, a traditional Russian sleigh. (sourse: RIA novosti)