Mariinsky Thater Second Stage will be opened one week earlier — 02nd of May. Diamond Schmitt Architects is set to complete a new home for the Mariinsky Opera, Orchestra, and Ballet, directly across the street from the old Mariinsky Theater in St. Petersburg.

Complementing the city’s 19th-century architecture while adding a distinctive contemporary element, the new building will be one of the largest opera facilities in the world. Features include a main stage and rehearsal stage with multiple support areas; rehearsal rooms; dining and production space for 2,500 staff members; and a rooftop amphitheatre.

The 2012/2013 season of the Mariinsky Theatre marks the 25thanniversary of the leadership of General and Artistic Director Maestro Valery Gergiev, who has built the Mariinsky into one of the largest, most acclaimed and most dynamic performing arts institutions in the world. The Mariinsky will celebrate this anniversary with an impressive schedule of tours, performances, recordings and events, and will usher in a new era of even greater artistic possibilities with the inauguration of the new Mariinsky Theatre (Mariinsky II).The new opera house, funded by the Russian Government, is among the largest in the world, capable of supporting the most demanding productions. When it opens in May 2013, it will join the legendary Mariinsky Theatre and the Mariinsky Concert Hall to further the transformation of the Mariinsky’s complex into one of the world’s premier centers for classical music, opera and ballet. 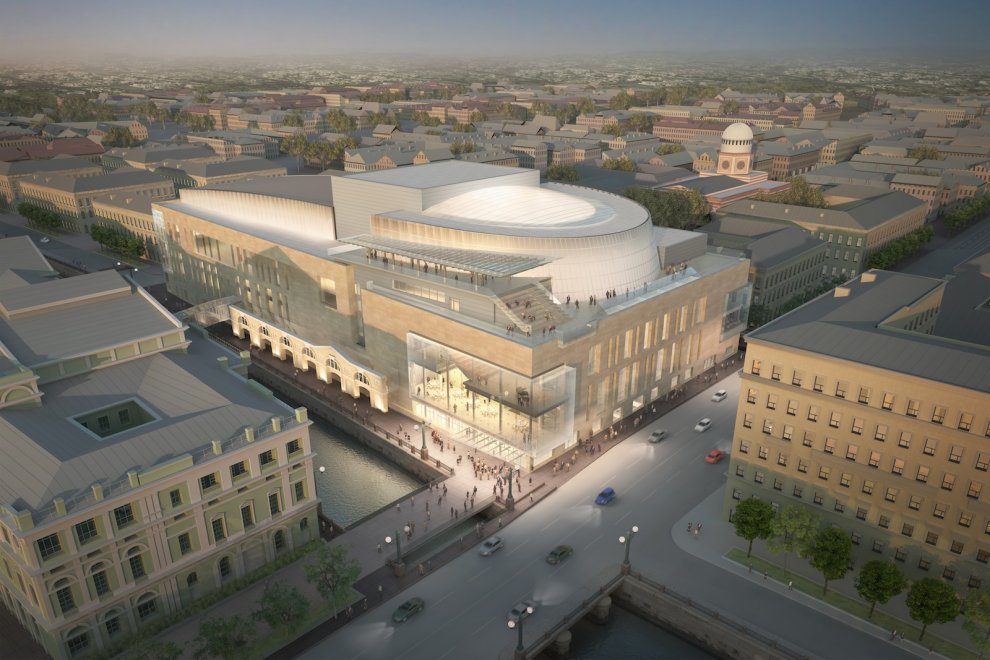 While maintaining a robust performance schedule in its existing complex in 2012/2013, the Mariinsky will simultaneously conduct ambitious international tours. The itinerary will bring the Mariinsky Opera, Ballet and Orchestra to more than 35 cities worldwide, including such prestigious venues as Carnegie Hall in New York, Suntory Hall in Tokyo, Shanghai Oriental Art Center in China, the Seoul Arts Center in Korea, the Theatre des Champs‐ElyseÅLes in Paris and the Salzburg Festival in Austria.Among the performance highlights of the season will be the Mariinsky Ballet‘s celebration of the 120th anniversary of the premiere of Tchaikovsky’s and Petipa’s The Nutcracker at the Mariinsky Theatre in 1892.

Commemorating this occasion, the Mariinsky has collaborated with EuroArts Music to create the film The Nutcracker in 3D, bringing its deep historical tradition together with cutting‐edge technology.The Nutcracker in 3D will be released in Europe in November 2012, Asia in December 2012 and the United States in December 2012, where it will be shown in more than 400 theaters.The coming months will also witness the release of two major new recordings on the Mariinsky Label. In December 2012 the label will release the emotionally charged recording of Maestro Gergiev conducting the Mariinsky Orchestra in Shostakovich’s Symphony No. 7  «Leningrad,» the most recent in the Orchestra’s cycle of Shostakovich symphonies. February 2013 will see the launch of the Mariinsky Label’s most ambitious project to date, the full cycle of Wagner’s Der Ring des Nibelungen.

The first recording in the series, Die Walküre, will feature Jonas Kaufmann, Nina Stemme, Anja Kampe, Mikhail Petrenko and ReneÅL Pape with the Mariinsky Orchestra, conducted by Maestro Gergiev. »These past 24 years have seen a wonderful flourishing of the Mariinsky Theatre in both its artistic program and its institutional achievements, as we have brought the Opera, Ballet, Orchestra, Chorus and our extraordinary Company into the 21st century and a more active and outgoing engagement with the world,» stated Valery Gergiev.  «We are carrying forward our progress in every way in 2012/2013, including the opening of our magnificent new opera house. 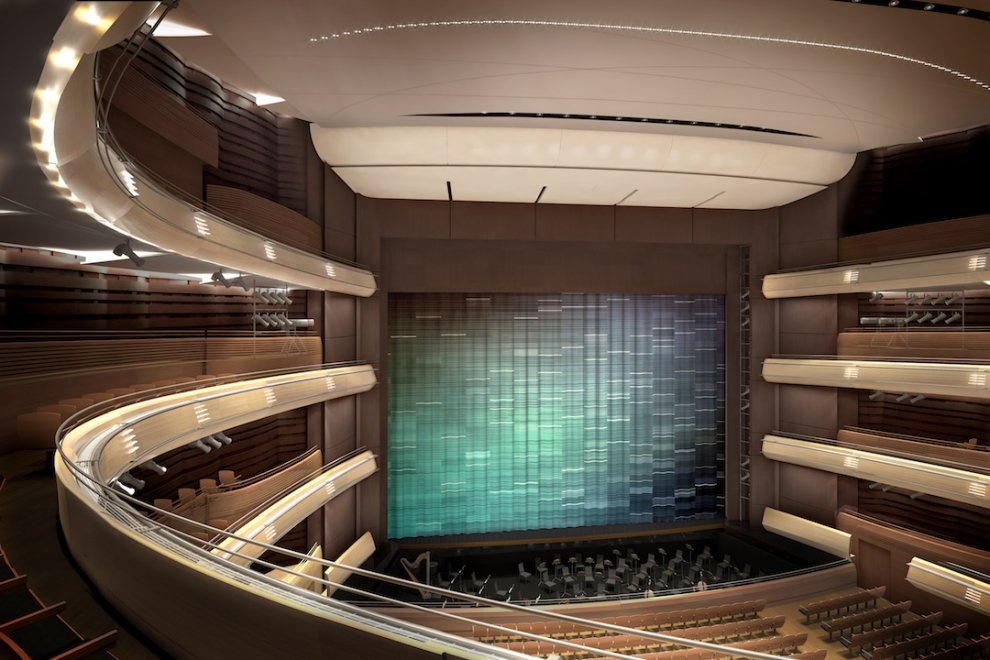 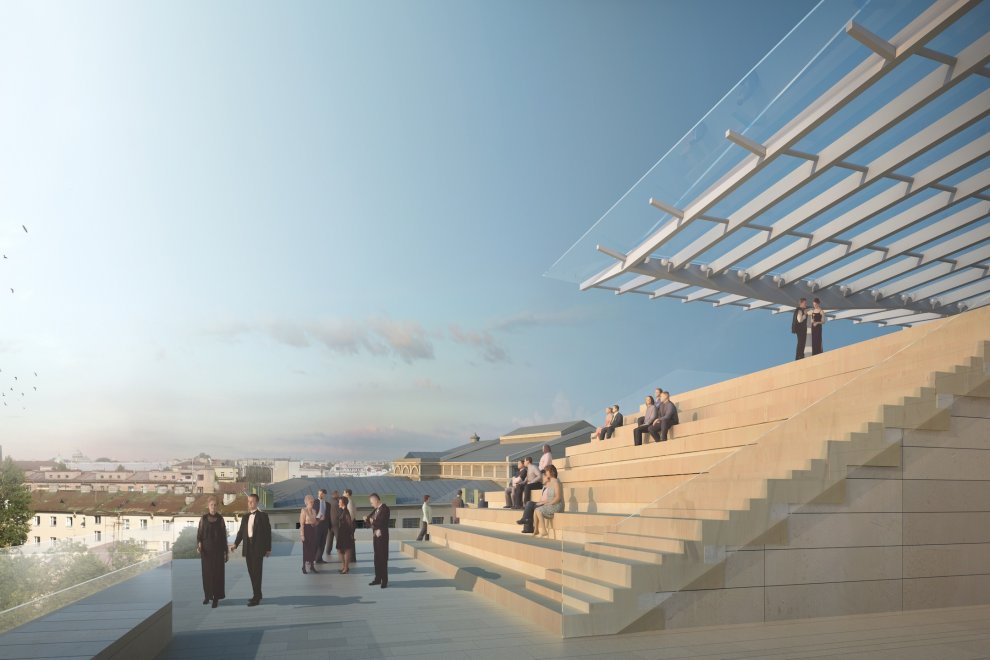 The events and festivities that will surround the opening of Mariinsky II will be announced in 2013. Mariinsky II is designed to complement St. Petersburg’s beloved 19th century architecture while adding a distinctive new element to the landscape of Theatre Square. Dramatically large glass facades and bay windows set in the masonry exterior will provide panoramic views of the city and the adjacent Mariinsky I, while fulfilling the traditional role of colonnaded porticos. A gently curved metal roof will be enlivened by a glass canopy, giving the building a contemporary identity that is nevertheless rooted in St. Petersburg’s architectural heritage.The auditorium, designed in the tradition of 18th and 19th century opera houses, features a horseshoe configuration with three balconies, offering optimum acoustics and sightlines for approximately 2,000 operagoers. Capacious backstage facilities and advanced technological capabilities, and acoustical design by Müller‐BBM, will allow for the production of the most elaborate and demanding works. An additional orchestra shell on stage and an orchestra pit with platforms that can be raised and lowered will enable Mariinsky II to function as an ideal hall for symphonic concerts as well as opera productions.Other facilities of Mariinsky II include a rooftop amphitheatre  (soon to be a principal space of the Stars of the White Nights Festival), a lobby amphitheatre, multiple rehearsal rooms and backstage space that allows multiple productions to be performed in repertoire.

Jack Diamond, Principal Architect of Diamond Schmitt Architects, stated,  «When I was approached by Valery Gergiev to enter the international competition to design the new Mariinsky Theatre, he presented the opportunity to work in one of the world’s most magical architectural settings, not to mention with a Maestro who is justifiably renowned as one the world’s most respected leaders in the performing arts. I am very proud of Mariinsky II and trust it will achieve our design intent, which is to channel the immense creative spirit that is at the heart of the Mariinsky Theatre and its Maestro.